Jayne is looking forward to her role in the next 14/48 in November which she describes as a ‘reclining, non stressed, wine in hand audience member’ 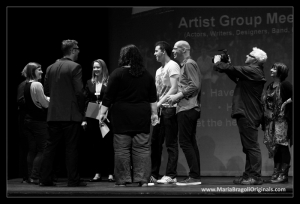 The writers huddle on stage.

‘Petrifying, exhilarating and frequently, pant wettingly hilarious. It’s fascinating how long you might pick apart ideas, agonise over narrative arc, carefully curate your characters yet, at 8pm on a Thursday eve, when you are given a theme and a 9am next day deadline, it’s surprising how speedily you slash all those musings and just get on with writing something. Handing it over to (what was for me at the time) a total stranger (now a dear friend and colleague) putting your trust in him to take care of your words and shape them into something acceptable on a stage with actors who’ve also probably never before met, in front of a paying audience; all of us taking a massive risk that could quite easily go so tits up. But, both of my short plays on both nights were tremendous. Not in my own trumpet blowing way. By handing my scripts over to expert directors, working with fantastically talented actors, hoisted from a hat at random, I was jammily lucky that they all liked the scripts and kinda ‘got it’ straight off and enjoyed the process of breathing life into the stories, giving an amazing performance, making the audience cry with laughter – making me look clever – bonus!. We must have all been so brave or incredibly naive, to enter into this brand new to Britain, boisterous ballsy American, quick-fire, ‘do it big or go home’ style theatre festival. However, I had the most exhilarating, fly by the seat of yer pants, self-esteem building, pride pluming, connection establishing, chaotic, crazy and comedic three days. I would do it all again…I did, and would advise anyone who works in theatre to put your skills and wit to the test and have the best working weekend of your year.’

View all posts by ivoryfishbone